Devotional: Never Give Up 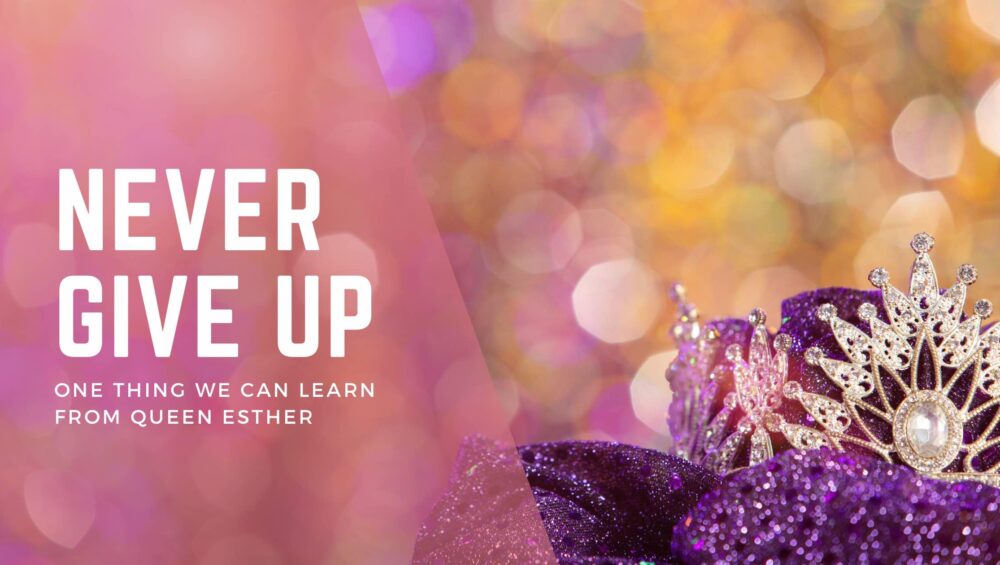 Esther was a very prominent biblical figure. So much so, in fact, that she has an entire book of the Bible after her! Who was she, and what can we learn from her story?

Esther lived during the reign of the Persian King Xerxes of Susa. During this time, King Xerxes ruled over the people of Israel. When Esther was young, King Xerxes was searching for a wife and a new queen. He brought many women to him, making most of them his concubines. He would only select one who he would call his queen. While Esther initially caught Xerxes’ eye with her beauty, she truly captivated him with the depths of her character. He recognized her as a woman fit to rule by his side. She wins Xerxes’ trust further when she uncovers a plot to assassinate him. Now, Xerxes was in her debt.

At this time, Haman, part of the king’s court, was plotting genocide against the Jewish people. Now was the time for Esther’s defining moment. She used the trust and favor she had gained with the King to ensure the safety of God’s people and crush Haman’s wicked plans. Even though approaching the King without being summoned could have cost her life, she trusted God anyway and stood on behalf of her people. Her bravery, character, and compassion led her to become such a beloved figure in the history of our faith.

What can we learn from Esther’s story? To never give up! Esther found herself in a really complicated situation but still trusted God and did what He wanted her to do. She must have felt scared and insecure like we all do sometimes, but she didn’t let that stop her. King Xerxes was a powerful man and could be ruthless. One wrong move on Esther’s part could have cost her everything, even her life.

At one point or another, we will face situations that are complicated or even feel impossible. That’s why we must remember that for each of our problems, God has hundreds of solutions. His perspective is boundless, and if we put our faith in Him as Esther did, He will lead us precisely where we need to be, all according to His plan. Isaiah 41:10 says, “Don’t be afraid, for I am with you. Don’t be discouraged, for I am your God. I will strengthen you and help you. I will hold you up with my victorious right hand” (NLT). Nothing is more powerful than the God who loves us and fights for us always. Cling to this truth, and never give up!

Lovely to have you here. We’re so glad that you’ve found your way to our blog!

If you’re reading this, you’re probably interested in faith-based stationery and christian lifestyle.

Here we’re sharing product news, articles, and freebies that we hope will enrich your faith journey and bring encouragement to your day.

If you have any questions, send us a message on Instagram @PlanningFaithCo

Looking for something?
We write about
Latest articles
Inspiring

We use cookies on our website to give you the most relevant experience by remembering your preferences on repeated visits. By clicking “Accept”, you consent to the use of all the cookies.
CCPA notice.
Cookie Settings Accept
Manage consent

This website uses cookies to improve your experience while you navigate through the website. Out of these, the cookies that are categorized as necessary are stored on your browser as they are essential for the working of basic functionalities of the website. We also use third-party cookies that help us analyze and understand how you use this website. These cookies will be stored in your browser only with your consent. You also have the option to opt-out of these cookies. But opting out of some of these cookies may affect your browsing experience.
Necessary Always Enabled
Necessary cookies are absolutely essential for the website to function properly. These cookies ensure basic functionalities and security features of the website, anonymously.
Functional
Functional cookies help to perform certain functionalities like sharing the content of the website on social media platforms, collect feedbacks, and other third-party features.
Performance
Performance cookies are used to understand and analyze the key performance indexes of the website which helps in delivering a better user experience for the visitors.
Analytics
Analytical cookies are used to understand how visitors interact with the website. These cookies help provide information on metrics the number of visitors, bounce rate, traffic source, etc.
Advertisement
Advertisement cookies are used to provide visitors with relevant ads and marketing campaigns. These cookies track visitors across websites and collect information to provide customized ads.
Others
Other uncategorized cookies are those that are being analyzed and have not been classified into a category as yet.
SAVE & ACCEPT
Top
Shopping cart close